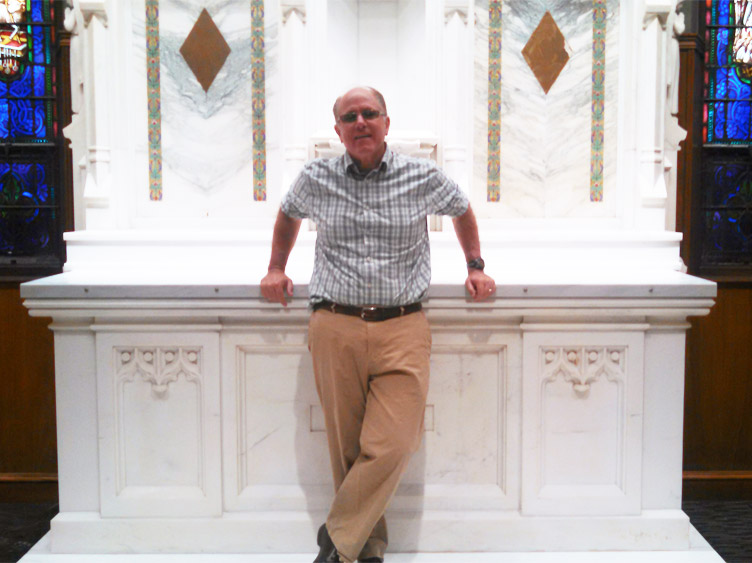 Ralph Petrillo, the co-owner of Petrillo Stone, recently celebrated 40 years in business, while his business is celebrating year 111. Petrillo’s grandfather, Antonio T. Petrillo, founded the company in 1907 after emigrating to Mount Vernon, NY from Italy. With him, he brought knowledge of traditional masonry techniques–the type of time-honored methods that set the craft apart. Even as masonry evolves, many of its aspects remain, some withstanding for longer than a century.

Ralph Petrillo describes his business as “a glue that binds three generations and their technologies, workmanship, and ideologies.” After founding the company, Antonio Petrillo passed his knowledge onto his son, Ralph’s father, who passed the knowledge onto Ralph and his brother Frank, who run the company today.

“It’s always exciting when I have the chance to replace stonework that my father or grandfather also worked on,” Petrillo said.

Despite much staying the same during his 40 years in stone, one big change Ralph has seen is the location where stone is manufactured. It used to all be cut at the same location as the project, but now it’s manufactured worldwide and mostly imported into New York City. And now that the industry encompasses a larger scope, Ralph and Frank are encountering challenges that their father and grandfather did not.

“The work is definitely getting more competitive, especially since we’re competing against factories in countries that have cheaper labor, water, property, and electricity,” said Ralph.

Ralph certainly has the experience to attest to changes in the industry. Even before he and Frank officially took over the business, they were steeped in masonry. Since they were children, they’ve been around stone.

“We grew up around masonry. We would often stop by the shop, even as young children, and see the workers there cutting stone. One memory that sticks out is when the shop was working on cutting stone for the Classic Roman Travertine for the Lincoln Center Buildings that were created in the 1960’s,” said Ralph.

According to Ralph, if we were able to compare the shop from the 60’s side by side with the shop from today, we would notice many similarities, but also many differences.

“We do have some new machines but mixed in with that are very old and important machines from many years ago. Styles are always changing, and we’re always making stone for brand new buildings, and buildings that are over 100 years old. Any style of building an architect can imagine, we can build,” said Ralph.

That tie between past and present is valuable to Ralph.

“One of my favorite things about my industry is how it connects the historic work from the past, with the things we’re currently working on, which will be around for future generations,” said Ralph.

Ralph says his favorite projects to work on are the more challenging projects, which Petrillo Stone is uniquely equipped to handle.
“We can fabricate and draft all types of natural stone work. Some of these kinds of projects are the tracery windows and Gothic Style arches in Keating Hall at Fordham University,” Ralph said.

In addition to having unique skills, the Petrillo brothers also pride themselves in a dedication to quality.

“We use 2 techniques to control the quality of the stone in the finished product. We use them at our shop, and most other shops do too. One other way is to have every stone reviewed by an expert before it ships out. Another option, that’s increasing in popularity is when the architect visits the factory to look at the completed stone work right on location,” said Ralph.

Besides carrying on the work of his father and grandfather, Ralph finds fulfillment in the opportunities he’s had to work on some of his favorite buildings.

“I have a few buildings I’ve always loved, and I’ve gotten to work on them recently and in the past. These include the Metropolitan Opera House at Lincoln Center and the Metropolitan Life Insurance Company. We also recently supplied the New York Life Building with several new art deco stones,” Ralph said.

Since it’s been 40 years, we raise a question to Ralph: “Will there be a fourth generation of Petrillo Stone?”

For now, the answer is uncertain.

“I have 2 young girls, and Frank has 3 boys. It’s an interesting idea, but only time will tell,” Ralph said.

Back in 1907, Antonio T. Petrillo moved to Mount Vernon, NY from Italy. Ever since then, Petrillo Stone has exceeded standards of different builders, architects, and designers. Petrillo Stone Corporation fabricates, wholesales, installs, and imports limestone, marble, granite, and other stone products for the interiors and exteriors of commercial and residential buildings.