By now, it should be well known that I love neat facts, history, and stonemasonry. This month, I decided to combine those loves and post about some of my favorite stonework from around the world. Enjoy! 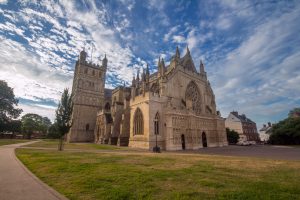 Some of the most eye-catching pillars of architecture from the old world are the cathedrals stamped across England. One of the most noteworthy for stonemasons, such as our team at Petrillo Stone, is the Exeter Cathedral, properly known as the Cathedral Church of Saint Peter in Exeter. Exeter is an Anglican cathedral, and the seat of the Bishop of Exeter, in the city of Exeter, Devon, in South West England. Gothic-styled stonework, the Cathedral was constructed from stone from more than 20 different local quarries. A combination of Salcombe Stone, Chalk, and Devonian Limestone, Exeter is genuinely a structure that architects, stonemasons, geologists, and historians appreciate.

No one can talk or write about stonework without mentioning Ancient Greece. The Greeks were incredible architects, and they were not discouraged by the countless number of times invaders destroyed their masterpieces. Fortunately, the stonework erected in 482 BCE is still a sight to behold. The once gold and ivory statue of Athena stands atop the Acropolis in the city of Athens. Constructed mainly from limestone, these Greek architects weaved in Pentelic marble to create the jaw-dropping scene you see today.

Just a rock skip away in Rome remains the megalithic Theatre of Marcellus. The architectural influence of many theatres of the time, including the master Colosseum, was built from tufa and travertine, two types of stone known for their ability to resist water absorption. In addition, Marcellus was the first known structure built with fired Roman brick. These skilled architects knew how to construct a robust design, as this is the only theater from the period of Augustus (circa 11 BCE) surviving today.

While we all seem to fancy ancient and olde worlde stonework, we cannot forget that we are surrounded by beautiful stone structures right here in our neck of the woods. Here is our top-three of the must-see stonework around New York City: 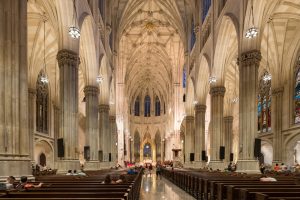 The Stonework of Petrillo Stone

Of course, I can’t write about my favorite stonework without mentioning the work we have done over the years. No, our work isn’t quite as old as Ancient Greece, but I still am quite proud of our accomplishments. Stonemasonry is not only my career; it is my passion. I would be honored for you to view any of our recent stonework projects.